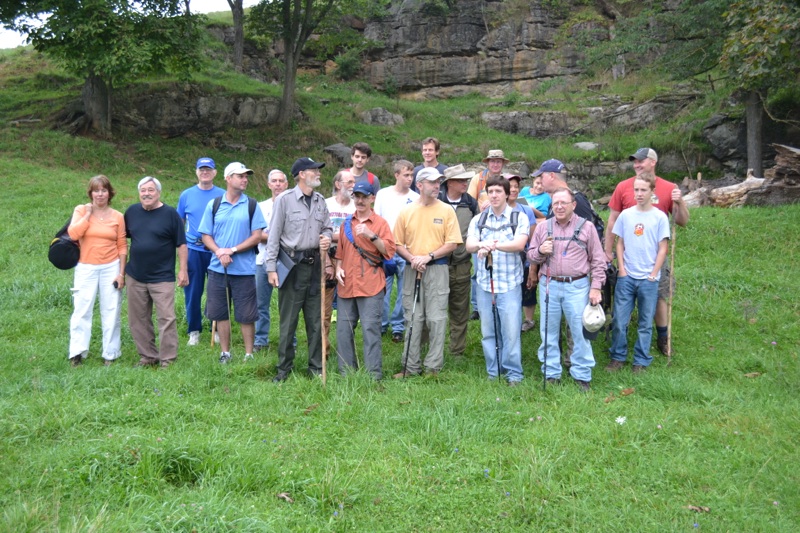 Our hike began just south of Hillsboro and followed the route that the 8th West Virginia Mounted Infantry took in attacking the entrenched Confederate position on top of Droop Mountain on November 6, 1863.  The regiment lost 3 men killed, and 8 wounded in the attack.

Park Ranger Mike Smith welcomes hikers to Droop Mountain.
Unloading the bus to descend Headquarters Hill.
Brothers Keith and Mike Pauley.
Mike Smith points to a fog enshrouded Droop Mountain.
Hikers enjoy the view from Headquarters Hill where Gen. Averell watched the battle in 1863.
The Donahues traveled all the way from Littleton, Colorado to participate in the hike.
The Blue Hole.
My son, Jared Cunningham, with our good friend, Keith Pauley.
Hikers peer down into the depths of the Blue Hole.
Looking back at Headquarters Hill.
Hiking to the base of the mountain.
Enjoying the view as we reach the base of the mountain.
Droop Mountain looms above us.
Trekking along...
The scenery was outstanding along the entire hike.
The weeds were high in some places.
Single file through a meadow and into the woods.
Entering the woods, the climb becomes steeper.
Mike Smith talks about the attack of the 8th WV Mounted Infantry up the mountain along the route we followed.
Getting steeper still...
Once on top of Droop Mountain, Mike Smith uses a map to orient the hikers to our location.
From the Lookout Tower, we can see Hillsboro and the starting point for our hike (Headquarters Hill) in the distance.
Mike Smith discusses the Confederate retreat and the Federal pursuit.
Hikers enjoying the view from the Lookout Tower.
The 4.15 mile hike concludes at the Bloody Angle at Droop Mountain Battlefield State Park.
Afterwards, hikers enjoyed a reenactment in the park.
Menu
Menu