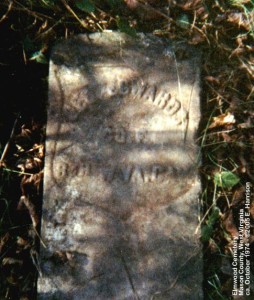 Elmwood Cemetery, at Elmwood on Tribble Road, Mason County. The cemetery was destroyed in the early 1970s by mining operations. This cemetery was located in the field opposite the original Elmwood Church, both sites now encompassed by the abandoned Putnam Coal Mine on the south bank of Mud Lick Fork of Thirteenmile Creek at Elmwood in Union District. Exact former location of the cemetery has yet to be found, though it is reported to have been on the edge of the area that was bulldozed for the mine to the east of the mine silo currently standing at the site. See also: West Virginia Cemetery Preservation Association and George Edwards, Jr. on Find a Grave.