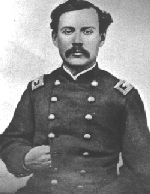 The Eighth Regiment, Virginia Infantry, (of the Union Army) was organized in the Kanawha Valley, by Major John H. Oley, during the fall of 1861, headquarters being at Charleston. The regiment was ordered to New Creek in April, 1862, becoming a part of General Fremont’s Mountain Department, and with the Sixtieth Ohio Infantry, was organized as an advance brigade, and placed under the command of Colonel Cluseret, A.D.C. to General Fremont. In the pursuit of Stonewall Jackson up the Shenandoah Valley, this brigade had the advance, and were engaged in several skirmishes with Turner Ashby’s cavalry, following him closely to Harrisonburg, where they engaged him, resulting in the death of Ashby. This brigade occupied the center at the Battle of Cross Keys and was complimented by General Fremont for its gallantry.

The regiment became a part of General Bohlen’s brigade, Sigel’s Corps, in General John Pope’s campaign, and served with great gallantry in all the engagements of that campaign, including the Second Battle of Bull Run. On arriving at Washington, D.C., the regiment was transferred to General Milroy’s brigade, and returned with him to western Virginia, and was again assigned to duty in the Kanawha Valley. In November, 1862, it was transferred to Colonel Moor’s brigade. On the assignment of General Averell to the Fourth Separate Brigade, this regiment was mounted, and became a part of his brigade, as the Seventh West Virginia Cavalry, with which it served as long as the organization existed.

The regiment spent the last years of its term in the Kanawha Valley, occupying the following different posts: Charleston, Coalsmouth, Winfield, Point Pleasant, and Guyandotte. Early in January two or three brigades of Confederate troops were sent to winter in the counties immediately in the front of these posts, and the regiment was kept very actively engaged during the winter, to prevent incursions by them, and in the protection of loyal citizens and their property. Several small engagements took place, in which a number of the enemy were killed, and about two hundred prisoners taken. About the 1st of February, 1865, six officers and nearly one hundred fifty men were discharged by reason of expiration of term of service, but the regiment was immediately filled to the maximum by the muster-in of recruits.

From the time of the surrender of Lee’s army the regiment was engaged in patrolling the twenty counties of southwestern Virginia, composing the District of Kanawha, for the purpose of paroling returned Confederates and maintaining order in the country. Over 5000 Confederates were paroled by the officers of this regiment. In June, 1865, Colonel John H. Oley, who had been in command in the Kanawha Valley for a year previously, received an appointment as Brevet Brigadier-General, to rank from March 13, 1865, for gallant and meritorious service in West Virginia.