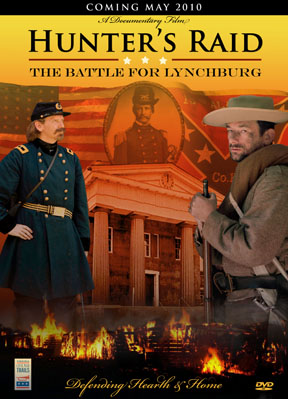 The award winning film, Hunter’s Raid: The Battle for Lynchburg, is available for purchase on DVD from the Historic Sandusky Foundation.  Click here for more information and to order:  www.historicsandusky.org.

Hunter’s Raid: The Battle for Lynchburg tells the story of Lynchburg Virginia, June 17 & 18, 1864. The 55-minute documentary describes the tense days when Gen. David Hunter and his army of 18,000 Union soldiers are ordered to capture Lynchburg. Defended only by old men and young boys, Lynchburg must prepare for the worst. If Hunter can seize this important city, it might cripple the Confederacy permanently, and end the war. The Sandusky house was commandeered by Hunter as Union Army headquarters, but Hunter was driven out of Lynchburg by Confederate Gen. Jubal Early, saving the Hill City from major destruction.

Hunter’s Raid is the winner of three regional Emmy® awards.