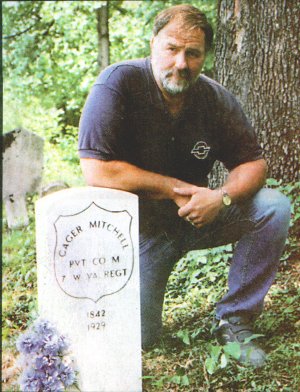 [adapted from a local newspaper article in Gilbert, West Virginia]

Micajah G. “Cager” Mitchell was laid to rest in 1929 on a hill above Elk Creek just north of Verner. The grave of the Civil War veteran was marked by a simple rock until last week, when Cager’s grandson erected a headstone for his ancestor, noting the service to his country in a time when brother turned against brother.

Reuben Mitchell looked into his family history and discovered that his grandfather had enlisted in the Union army in 1864, in the last year of the Civil War. He obtained verification of the enlistment as a private in Company M of the 7th West Virginia Cavalry in October of 1864 from the National Archives in Washington. Along with a copy of Cager’s actual enlistment form. Mitchell obtained other documents showing his grandfather’s service in the Civil War.

Cager survived the last few months of the conflict, which by then had been centered in areas well away from the hills of the new state of West Virginia. He went on to marry, raise a family, survive his first wife and marry a second and raise another family. Cager served as a Methodist circuit preacher in the area in his later years.

One of the offspring of Cager’s second marriage, Onnie Mitchell, was born in 1913 when Cager was 71 years old. Onnie Mitchell, now 86, provided some insight for the research into the family history undertaken by his youngest son, Reuben. Last Tuesday, Onnie Mitchell, only surviving child of the veteran, and his son Reuben were on hand at the grave of Cager Mitchell as the gravestone was installed to remember the man and his service to his country.

Reuben says he’s also applied to the state for a medal which was to have been awarded to all Civil War veterans after the conflict. (Reuben Mitchell has since received the medal from the state of West Virginia)

“The grave went for 70 years, just marked with a rock,” said Reuben Mitchell. That’s changed now, and the hillside cemetery above the old Elk Creek coal processing plant has become a piece of West Virginia’s history.