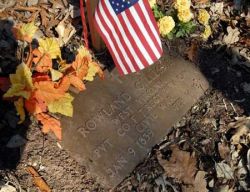 Soldier’s grave to be moved due to U.S. 35 construction

WINFIELD — Joyce Saunders already had a passion for uncovering her family’s history when she got a phone call about a mountaintop cemetery in Putnam County.

It was a piece of land unknown to Saunders — and apparently, most everyone else. The Gillispie/Roach Cemetery was overgrown with brush. Grave markers were nearly nonexistent. Some burial plots were evident only from the decades-old indentions in the earth.

The cemetery also had another important quality: It sits in the path of the new U.S. 35 route.

Surveyors who were staking land this spring for the new route through the Putnam County woods found Roland Gillispie’s marker. Further examination of the hillside showed numerous other graves or signs of graves. Only five of the estimated 17 burial plots have been positively identified.

Gillispie’s plot was the one that gave state Division of Highways surveyors clues into the mystery of their discovery. Roland Gillispie was a Civil War veteran, and his bronze cemetery marker was common for veterans in the early 1900s.

His grave is about 125 feet from the planned four-lane road’s centerline.

Gillispie was a Union soldier who was shot in Salem, Va. He lived many years after he was wounded, but died in 1911 at age 75, according to Saunders, Gillispie’s great-great granddaughter.

“I knew about him, but I had no idea where he was buried,” she said. “I was very excited when I found out about this.”

She found out when Ivan Kapp, cemetery coordinator for the state Division of Highways, called.

Saunders, who lives in Ohio, is using the experience as an important part of her family’s legacy.

She has been uncovering her family’s past for years. She has the Civil War medal one of her distant uncles was awarded.

Her husband, Don, said she had cooled off with the hobby until Kapp called her about her great-great grandfather’s gravesite.

To keep with her passion, Saunders has made the discovery of her great-great grandfather’s grave a family event. The first visit to the cemetery brought 14 members of her family. Since then, she has hiked the long trails to take other family members to the site.

In May, the family will have a funeral for Roland Gillispie in the veterans’ portion of Huntington’s Spring Hill Cemetery.

Saunders said the ceremony will be historically accurate. A branch of the Sons of Union Veterans of the Civil War from Gallipolis, Ohio will re-enact a Civil War-era funeral. Saunders is not revealing some of her story and burial details so she can unveil more of her family history when she reads a eulogy she is preparing based on her years of genealogical research.

“When you find something like this, it helps you put another piece into your family’s puzzle,” she said.

Gillispie was a soldier in the 7th Regiment of the West Virginia Cavalry.

His great-great granddaughter has pieced together his life and military career through various sources.

For example, she knows from National Archives documents that he was wounded by a shot to his right leg. A Civil War-era doctor’s diagram proved that.

The state will move Gillispie’s grave and others around it to make way for the U.S. 35 road project. The new road will improve east-to-west travel, replacing the two-lane road that snakes along the Kanawha River through Mason and Putnam counties and is known as a dangerous route.

Sometime next spring, the cemetery will be relocated to make way for the earth moving. Family members are being sought now, but Kapp isn’t sure everyone will be found. There are some people with the Roach family name and others with the surname Quinn.

So far, those include the graves of twin infants buried in the late 1880s. The most recent burial is from 1968 and that person’s family has since died, Kapp said.

If families can’t be found in such cases, the state relocates graves.

Kapp said more than 100 graves were moved in McDowell County. Similar relocations are common as graves are found on family property scattered throughout the state.

Kapp said he still works to relocate graves found along the Wayne County route known as Tolsia Highway as plans for road upgrades there slowly move along.

“I try to keep at them so when projects do come through we’re ready,” Kapp said.

The state handles the routine. State funds pay for the move, the new plots and new caskets if families request them, Kapp said. The final step, soon to be prepared for this Putnam cemetery, is a court order allowing the exhumation.